The Spy That Started Café Culture

Jerzy Franciszek Kulczycki (a.k.a. Georg Franz Kolschitzky) – a Polish nobleman, born in the town of Sambor in today’s Ukraine – led a rather eventful life as a soldier and spy. In an article, Jerzy S. Kulczycki, a Polish historian and also a relative of Jerzy Franciszek, writes:

He graduated from the Sambor parish school but doesn’t figure among those inheriting family estates, as he became a military man. It’s quite possible that he served under Jan Sobieski, the prospective king […]. He participated in Polish military interventions in Bukovina and Moldavia […]. At the time J. F. Kulczycki was already learning how to speak Vlach (Romanian), Turkish and also Hungarian.

Little is known for certain about the early stages of his life. Some claim that he was taken captive as a Polish soldier by Ottoman troops and was a prisoner of war for two years – which would explain how he came to know Turkish so well. Others object, arguing that Kulczycki was, in fact, a Serb, only posing as a Pole. This seems a rather far-fetched notion, given that Kulczycki’s Polish lineage has been personally traced back by his own historian relative.

There is no question, however, that in 1660, Kulczycki found himself in Vienna, where he arrived via Serbia. His command of Turkish and Hungarian secured him a job with the Oriental Company, an Austrian trade organisation doing business with the East, for which he worked as a translator in Belgrade. Three years later, he was already acting as an Austrian diplomatic courier and translator in Istanbul, where he also appeared in the same capacity in 1679. In the Ottoman Empire, Kulczycki was asked to spy on the Turkish military – he is even said to have had an audience with the Grand Vizier.

In 1680, Kulczycki returned to Vienna, where he presented the state authorities with a written report in which he informed them that Turkey was preparing for a war against Austria. Despite attempts being made by the Austrians to maintain peace, war broke out.

An endless sea of Turkish tents

On 13th August 1683, during the fifth week of the siege of Vienna by the great Turkish army, Kulczycki, along with his servant Jan Michałowicz, sneaked out of the city at night. They weren’t fleeing – on the contrary, Kulczycki was carrying out a secret mission for the commander of the city’s defence, Count Stahremberg, who wanted him to send out a plea for help. Dressed up as Turkish soldiers and using Kulczycki’s expert knowledge of the Turkish language and culture, the two managed to pass through the invaders’ camp unnoticed.

Here’s how the noted German writer Eberhard Happel described the passage in his 1688 book Thesaurus Exoticorum (Encyclopedia of Exotics):

When it began to dusk a little, an endless sea of Turkish tents unfolded before his eyes. The sight made him wonder which route to choose to pass through the camp. Nevertheless, he kept moving on together with his companion […] and to divert any suspicion from the minds of the Turks that were riding past them, every now and then he sang merry songs in their language.

The Poles eventually reached the chief commander of the Austrian forces, Duke of Lorraine Charles V, whom they presented with letters from Viennese officials and informed about the city’s desperate situation: the lack of ammunition and diseases spreading among the townsfolk. They also shared the intelligence about the Ottoman camp they had acquired during their journey. The two Polish messengers then returned to the besieged city, using the same ploy as before, to bring back word from the duke that rescue was on the way.

The good news boosted the morale of the fighters just enough for them to hold out until the famous Battle of Vienna on 12th September 1683, when a coalition of international forces led by Polish king Jan III Sobieski won a stunning victory against the Turks, saving the city. Kulczycki’s intel about the Turks’ positions most probably played an important part in that triumph.

Rewarded with food for camels

The Austrians rewarded Kulczycki for his courage. He received a house in Leopoldstadt and a nice sum of money. But what he wanted most, was something else entirely – after some effort on his part, he was allowed to run a coffee house. At the time, Kulczycki’s idea to open a café must’ve seemed rather odd as there were only a handful of such establishments scattered around of Europe – coffee wasn’t the popular drink it is today.

It was often even disliked for its popularity among ‘the infidels’, as shown by the following words written around 1670 by the Polish poet Jan Andrzej Morsztyn:

In Malta, I remember, we tried coffee
A drink [...] for Turks, but so very nasty
A beverage like vile poison and toxins
That doesn't let saliva pass through one’s teeth
A Christian mouth let it never sully

Since Kulczycki had been to Istanbul before the war, he must’ve discovered the local coffee culture, which was much older and far more developed than that of other European countries. The Pole had seen the potential of the steaming black beverage. There was also another key factor at play: he was in the possession of a huge amount of fresh coffee beans. The winners of the battle had seized, along with other loot from the enemy camp, numerous sacks of coffee beans the Turks had brought with them to keep themselves alert during battle. But the victors failed to recognise the beans for what they were, presuming they might be some kind of food for camels. Kulczycki, who was well aware of their worth, managed to take plenty of them for himself. 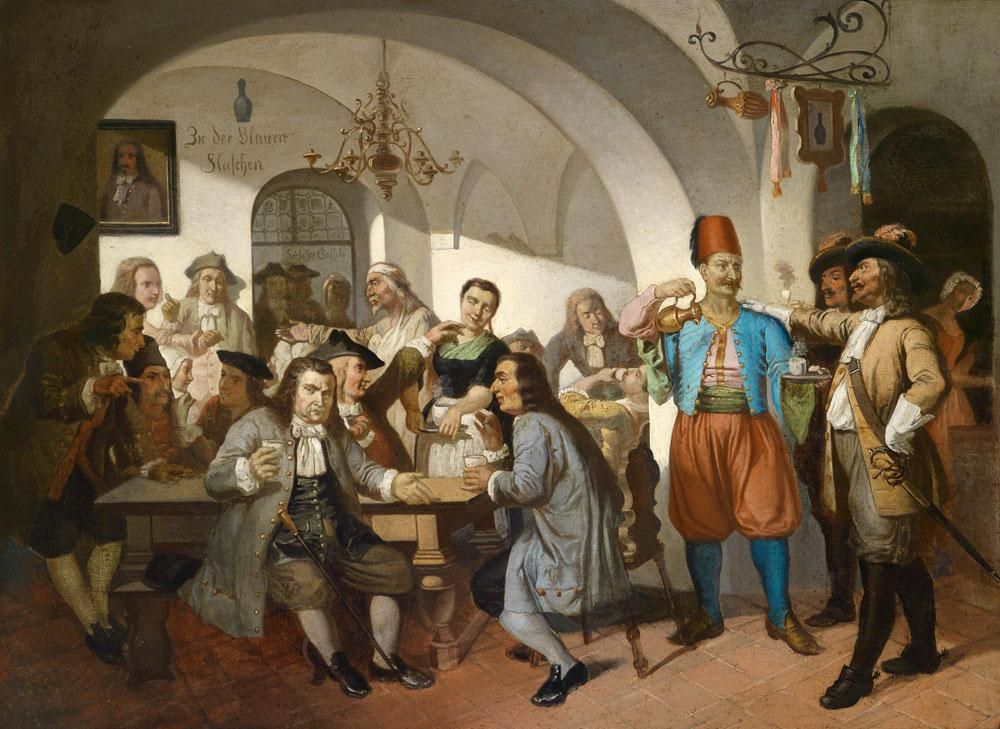 Equipped with the beans and the knowledge of what to do with them, Kulczycki opened the first café in Vienna. Or did he? In some sources, you’ll find that the first Viennese café was actually opened by an Armenian by the name Johannes Diodato, two years after the battle. This version of events was suggested by the Austrian historian Karl Teply at the turn of the 1980s.

Then again, the Austrian Piarist priest Gottfried Uhlich, in his 1783 book Geschichte der Zweyten Türkischen Belagerung Wiens (The History of The Second Turkish Siege of Vienna), claims that it was indeed the Pole who was first. Although this account was accused of being false by Karl Teply in 1980, it was later backed up by the findings of Jerzy S. Kulczycki, who used his family archive to research the topic and published a detailed article on it in 2007, entitled Prawdziwa Legenda Wiedeńskiej Wiktorii(The True Legend of the Viennese Victory).

His new coffee business changed addresses and it was only after some time had passed that it re-opened at 624 Schlossergasse Street under the famous name The Blue Bottle. The name was a tip of the hat to his second wife, Leopoldina Meyer. Supposedly before the two were married, she had nursed Kulczycki back to health after he had been wounded defending the city, using a medication stored in a blue bottle.

The place quickly became popular and was frequented by Viennese aristocrats such as Count Stahremberg himself. To amuse his guests, Kulczycki would greet them wearing a Turkish outfit. And to make the taste of the coffee to their liking, he would add milk and sugar – the unaltered flavour was a bit too tart for the Austrian palate. Kulczycki is considered to be the first to mix the black and white beverages and is apparently the one who invented the classic Viennese drink Wiener Melange, a coffee drink similar to the cappuccino. Some even claim that he convinced a local pastry chef to make The Blue Bottle guests special crescent-shaped rolls commemorating the victory over the Ottomans – which later evolved into the French croissant!

Despite the controversies regarding whose café was actually the first one to be established in Vienna, even the official website of the City of Vienna acknowledges Kulczycki’s contribution to the development of the city’s rich coffeehouse culture:

The history of Viennese coffee house culture is closely linked to the end of the Siege of Vienna in 1683. Legend has it that the Viennese citizen Georg Franz Kolschitzky (1640 – 1694) was the first to obtain a licence to serve coffee in the city following his heroic actions during the Siege of Vienna. The coffee beans left behind by the Turks were the basis of his success. A street in Vienna’s 4th district was named after him and a statue was put up at the corner of Favoritenstraße and Kolschitzkygasse.